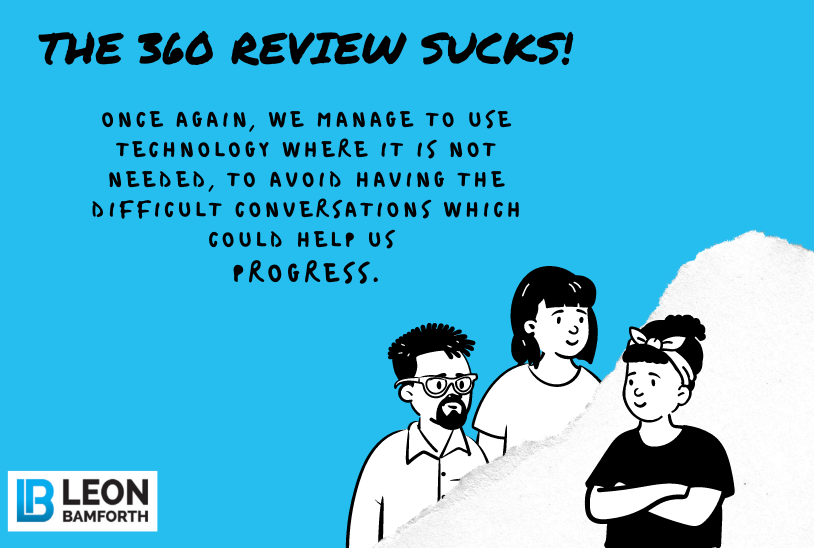 The importance of getting useful feedback

Gaining accurate feedback on our performance is the only way we improve. There is a reason that universally across all sports, the top men and women have a coach. At no point do they say “I’m good enough now, I don’t need a coach”. The value in watching sports is not just in an entertaining way to pass some time, but to be the best they must show the pinnacle of individual and team performance. Your role as a leader is to observe each individual of your team and build them up to be their best self in a way that compliments the team. If you get this right, and other factors are right, your team out perform every other team. Your role as a leader is coach, rather than manager. But coaching takes a lot of effort, and you have important forms and reports to fill in.

Well you are in luck, because that is where the 360 review comes in. Here are a couple of definitions:

Definition 1: “The 360 review is a performance evaluation tool that solicits feedback about an employee from all directions: their managers, coworkers, and direct reports. A 360 review seeks to provide actionable feedback to an employee and gives them a better understanding of their contributions to an organisation.”

Definition 2: “A 360 Review is an attempt to measure the performance of an individual in his or her role from different perspectives thereby giving an overall balanced view. The findings of a 360 Review can then be used to highlight areas of potential growth for the individual or the group as a whole”

Why do I despise the 360 review so much? Because they are very ineffective at fixing the problem they are looking to solve: gaining useful feedback. I’m not saying they have no value, I am just saying that compared to the alternative they are vastly inferior. Once again, we manage to use technology where it is not needed, to avoid having the difficult conversations which could help us progress. If I create a steel man argument for why, as mangers, we love the 360 review, it is because we have far more employees than we can meaningfully oversee so it gives us a quick way of creating some form of feedback. If I create a straw man argument for why we love the 360 review, it is because we can control it. We get the individual to solicit the feedback but they are not in control, we are. We get to see exactly who says what. We get to read it all. Then we get to choose what to share or not and we get to pronounce judgement on the employees performance. It is a massive ego boost for us. Whether you accept either explanation though, one thing it is not, is effective coaching.

Now, let us look from the employees perspective. We are teaching them how to take feedback, right? No. For the employee it is nerve wracking: we isolate them from the group by forcing them to invite others to judge them secretly, and we never get to find out what they said. Do you know what is the worst type of fear? The one where we can’t see the monster. One of the core conditions we need to be our best, is to feel that we are a valued member of a team, and now we are asking people to anonymously judge us. Often, the review is paired with an annual appraisal (which is another less affective technique – imagine giving a professional footballer guidance just once a year), so sometimes our bonus or promotion is tied to it.

I have completed many 360 review surveys over the years. When I was early in my career I was reporting based upon a superior and always I filtered what I said for fear it would come back to haunt me. If we are soliciting from those we know, it doesn’t take a genius to work out where anonymous feedback has come from. As the years have gone on, I came to dislike them for a deeper reason: their lack of transparency. If I do not have the spine to tell someone my feedback personally, why should I get to judge them secretly? In fact, the times that I have completed a 360 review on someone’s request, I give them the feedback directly as well.

Technology is wonderful, but it has removed our ability to have healthy, difficult conversations. Let me give you a different approach. When I finish a project, I take time to reflect on how it has gone. I will send out interview requests to as many of the key people I have worked with as I can, and then send email questionnaires directly to others. I conduct the interviews personally for my own feedback and learning. It has nothing to do with HR. To be fair, at this point I run my own business, so I am HR but the principle is the same.

Let me discuss the results for one of these reviews. I met with five people from various aspects of the project and sent an email with questions to five additional people. In each I asked the following questions:

For each interview I took an hour and the results were fascinating. I received lots of lovely feedback but here is the feedback that helped me be better:

“At the end of the project there was no need to thank [person x] as if they had saved your mother from the fire. They were useless.”

Let’s just agree that the other side were not ideal. They displayed very difficult behaviour, however we were at the end of the programme of work and they had delivered in the end. I don’t regret thanking them because I did so with the hope they would want to play nicely next time. But I should have been more aware of others reaction to this.

“I actually resented you for being the one to say thank you to everyone on the last calls finishing off the project. That should have been my job.”

The previous comment was given 30 minutes in, when I had established a safe environment. You don’t get that sort of feedback when it is mediated by technology and it was one of the most useful. Similar to my learning from the above feedback, I became more aware of all sides. If 1 -1 negotiation is like chess, then negotiation with multiple competing stakeholders on the call is like 3D chess.

I had not considered how my, what I thought were reasonable actions, affected others. A rookie mistake.

“Before [the call that I supported him on] I was really stressed. Nothing was going right. Afterwards it all fell into place because I knew I had an ally. It became a real buzz to work on the project with you”

I have mentioned elsewhere how I saved this particular programme £200,000 from an 1 hour phone call and so I expected this to be a valuable conversation. I gained so much more insight into the situation by actually asking the other side, after the dust had settled, how a stressful situation, that I had been able to diffuse, had been for them.

The responses I receive through these feedback sessions genuinely make me a better person. Imagine if all your employees had this sort of experience? I would implement this sort of review throughout your organisation, instead of a 360 review.

As a leader, be willing to give up control and don’t allow technology to get in the way of relationships. The only metric you need to measure is if you have you completed your own feedback at the end of a project. You should ask if there is any learning they want to share with you. Let them be in control and let them lead. A leader is not someone that puts a rope around someone’s neck and walks them, a leader is someone that teaches someone to be their best and watches them lead themselves. It is so much more rewarding.