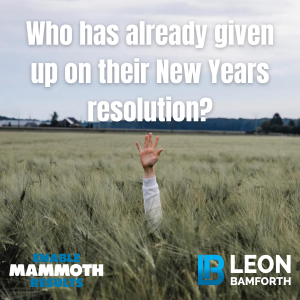 Well first you need to determine what you want. I know that sounds stupid, but do you really know? I find new year’s resolutions fascinating. Each of us have a yearning to be better, yet we often set goals for ourselves that we immediately fail at. My amazing wife decided she was not going to eat bread for the whole of January…but then there was some really (really!) nice bread left over and so she broke her resolution on the 1st of January.

Now I don’t think this is a slight on Claire, she is amazing and is an inspiration to me in goal setting. The truth is that this is all of us. We often say we want one thing and then immediately do another.

One way of finding out what you want is to ask yourself. A deeper way is to watch yourself.

When I work with teams, I am asking the same question. What do they really want and what does the business REALLY want from them? As we become clearer on that and start to focus on what really matters then people and businesses come alive. Longstanding problems become unblocked because we find a shared vision that matters.

I think this is especially difficult for IT teams because it is my experience that we often still fall into the trap that the purpose of IT teams is more IT. I personally would close every IT department and re-open them as business improvement departments, with the ethos being “we help the business do business.” Then when the accounts department say we want to be more efficient, the answer won’t necessarily be more expensive software which is costly to maintain and limits agility.

I worked with one health care team where we had already decided the answer was more IT. I took a step back. I spent time with each individual to find out what the problems were. We had a group meeting where I shared the problems that THEY had told me about, back to the team. Then I asked what they wanted to do about it. As a team they chose. They decided to make a small change to their process. No IT change in sight. That change saved £74K a year. It allowed the team to see more patients. It enabled them to cope with increased work even after they had lost a team member. Lucy, the team leader said to me “I don’t know how we would have survived without that change.”

As a wonderful bonus, the team felt closer as a team and knew they could rely on each other. Before they had been hiding their problems from each other, now they communicated better.

So, what do you really want from your teams this new years?